According to studies, whether you are an early bird or a night owl is completely genetic. However, we still have the question like is it really matter waking up early or sleeping late? Is the productivity of a freelance web developer really depending on the internal clock? Though research says that early birds are the more productive persons, our confusion is still not clear. So, let’s have a discussion on this topic to get the best answer for us.

Studies say that we don’t need to strive to wake up early or sleep late. In fact, we should optimize our working procedures so that we can manage the phase where our productivity is not high. Still there are many productive advantages of being an early riser. 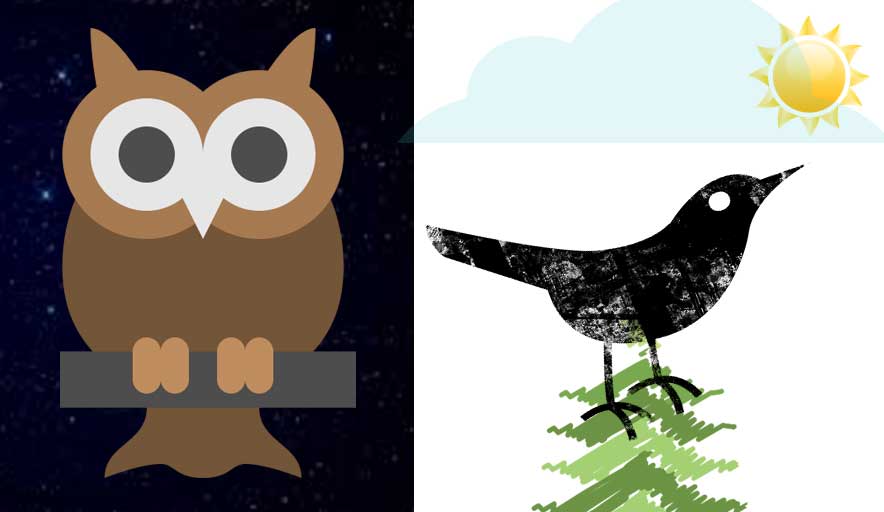 Chronotypes: An Owl or a Lark

Being diurnals, human are active at the day time and basically take rest at night. According to sleep science, chronotype refers to the preferred rising and bed time of a person. Though every human being is diurnal, there are many varieties also. Some people rise early, known as early birds or morning larks and some sleep late, known as night owls.

Our chronotype is decided by our own personal body clock. It not only impacts our sleep times, but also our blood pressure and body temperature at the time we work. Our chronotype is basically determined by genetics, whether you are a morning lark or a night owl.

Morning Larks are happier and productive:

Study says that early risers are more satisfied and happier people. This is not only applicable for the life in general, but also in working purpose. For instance, if you take the example of a freelance web developer, you can see that he/she gets so much benefit in his/her work, if he/she is an early bird. Early rising refers to the better health and immune system. This way, a developer can be stronger and can better concentrate in his/her website development work.

Concentration is the primary thing you need to apply for your website development work. Study says that sleeping late forces night owls to acquire negative mood for any type of work.

The night owls carries a stress hormone more, named Cortisol which helps prepare mind and body for the highly stressed situations. Although night owls are considered as more creative people, the early birds have the white matter more than them. The habit of sleeping late lets the night owls behave like anti-social and thus they become exploitative and manipulative, which affects their productivity badly.

Is it possible to change?

It depends on our biological cycle whether we are the early birds or night owls. The genetics decide our productivity clocks. But somehow it slightly depends on you also. If you are not an early riser and have a wish to be, then you can take the challenge and finally overcome your body to become a morning lark.

Sleep is your requirement:

First set up your mind, if you want to rise early. Set you alarm clock. You need to remember that eight hours of sleep is your body’s requirement for better health. So, switch off the devices you are using according to your bedtime routine and find the complete relaxation having a good night sleep.

Rise early and strengthen yourself:

If you are not an early riser, put a cup of coffee close to your bed. It will help you wake up early. Repeat it as a steady process to make it as your natural habit with your own willpower.

However, if being a night owl makes you more creative and productive, then you need not to change your habit. Follow the lifestyle which provides you more productivity and acquire that.